I worked at a bakery for many years and one thing I really miss about it was the smell of freshly baking bread when I’d arrive at 6am. There is just something about the smell of yeasted bread baking that has a homey, ancestral comfort to it and even though I rarely enter a bakery these days the smell that wafts out still gets me very time. Many a morning we would start the day with a freshly baked vegan apple pie scroll, sneakily scrolling mouthfuls between the morning rush and the many other morning jobs we multitasked with. Early mornings, yeasted bread and teen spirit. We worked hard, we had a lotta fun and all these years later I miss those scrolls.

But hey, what I have learned in the past year (filled with tedious amounts of time spend in lockdown) that yeasted bread is far less menial to make than I expected. Easy, in fact. More over- it is SATISFYING and kind of wonderful. Slowly needing the dough, feeling the flour turn into a warm stretchy and alive being, incubating your day baby and delighting in its growth and of course the enjoyment of eating the final product. Its a therapy I well and truely enjoy, especially during these trying times. 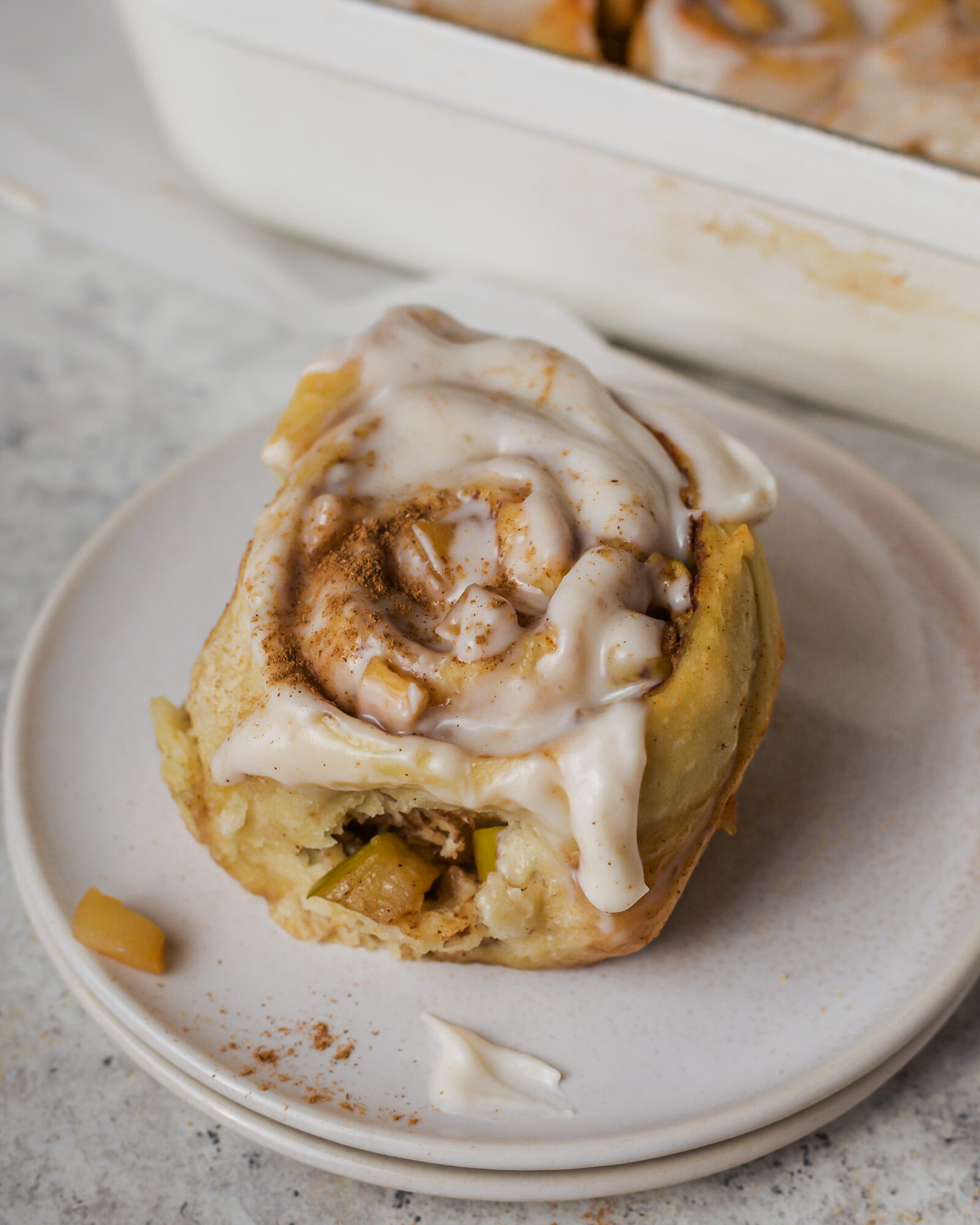 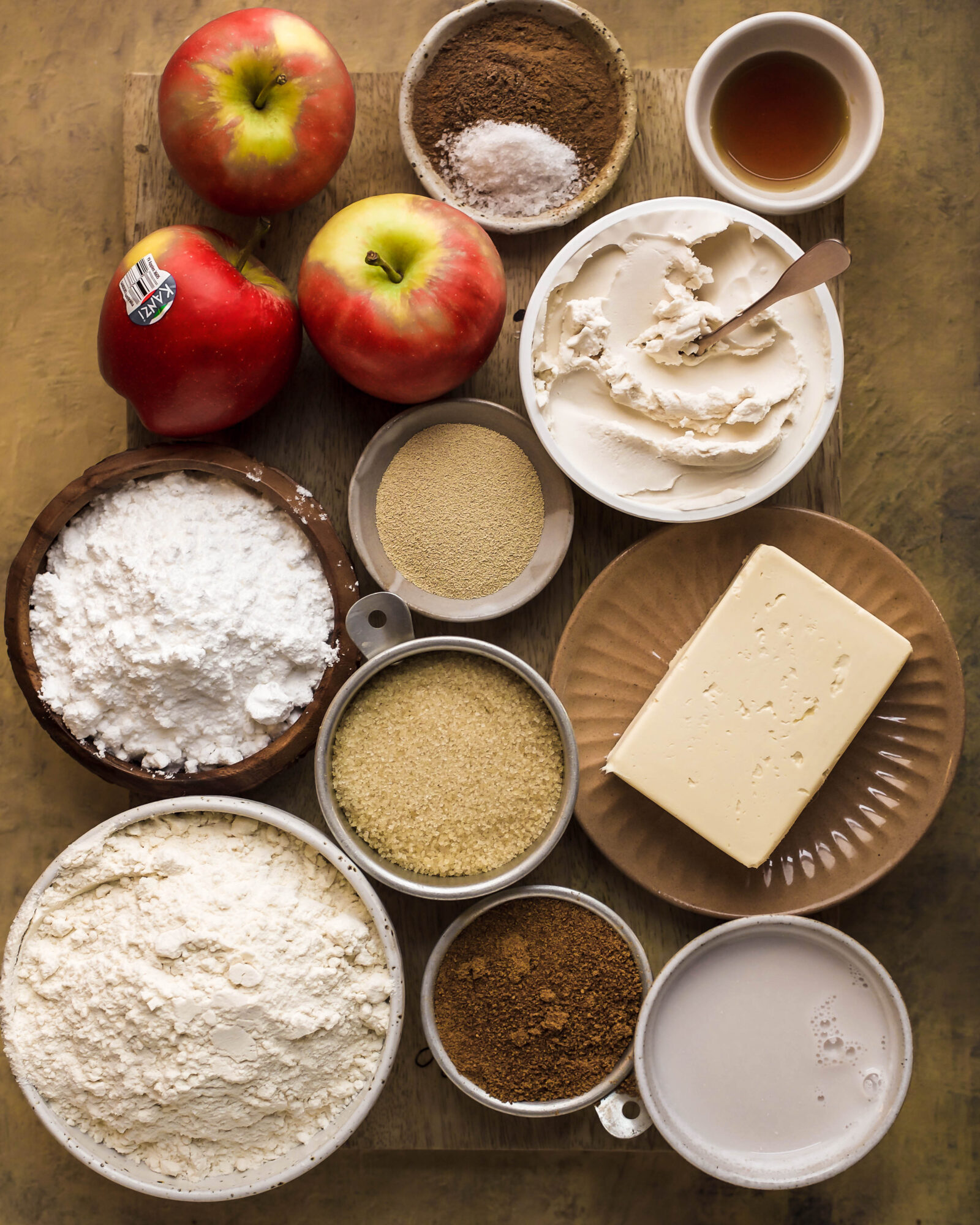 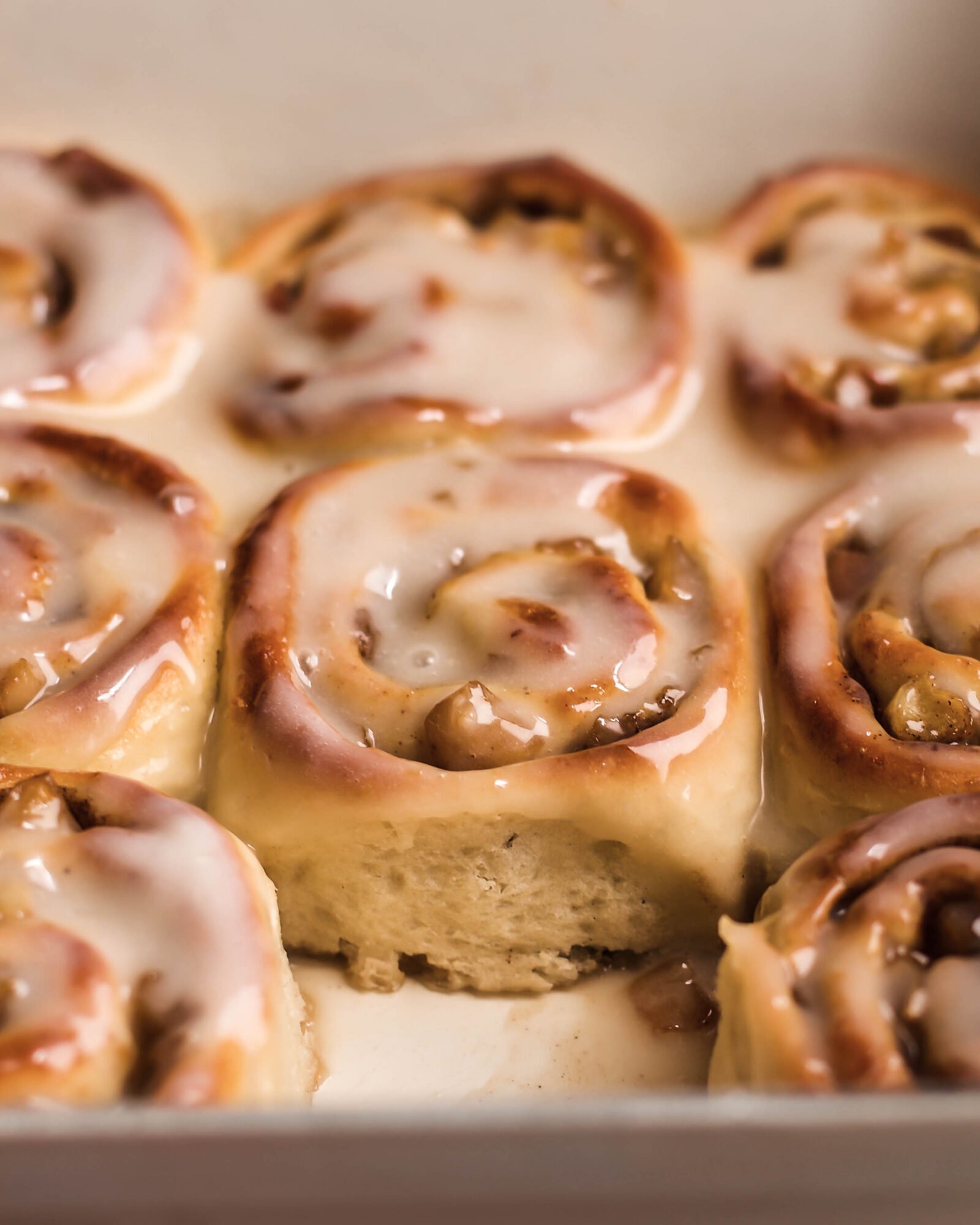 I know you’ll love these vegan apple pie scrolls just as much as I do. Here is why:

Getting this recipe right is really very do-able, however here are a few tips to make sure you get the perfect fluffy apple scrolls the first time you bake them.

Firstly, make sure you are using active dry yeast, not a substitute. Once this yeast has been opened it must be stored in the fridge so if it has been stored in the pantry it won’t be ok. In general if your yeast is more than 4 months old it likely needs to be replaced, but please check the expiration date as even if it has been opened less time it may still be too old to use. Don’t underestimate the power of active yeast- good yeast is imperative to soft and pillowy vegan apple pie scrolls.

To check your yeast, you can add 2 tsp yeast to a cup with 1 tsp sugar and 1/4 cup warm water. After 10 minutes the mixture should be bubbly and the smell should be a pleasant yeasty smell. If this is not the case, discard your yeast and buy a new packet.

2. What are the best apples to use for Vvegan apple pie scrolls

I used the kanji apples, however any baking apple will work. If you don’t have or like you could substitute for pears.

3. I don’t have/like cream cheese, what can you recommend for substitution?

Here is a basic recipe;

Add all the ingredients to a bowl and whisk together until shiny, then pour over the top of the warm scrolls.

I hope you enjoy these vegan apple pie scrolls with cream cheese frosting. If you make them we would LOVE an honest review or comment below- it helps us write better recipes and others find our work.

If you want more delicious vegan baking recipes, here are some: 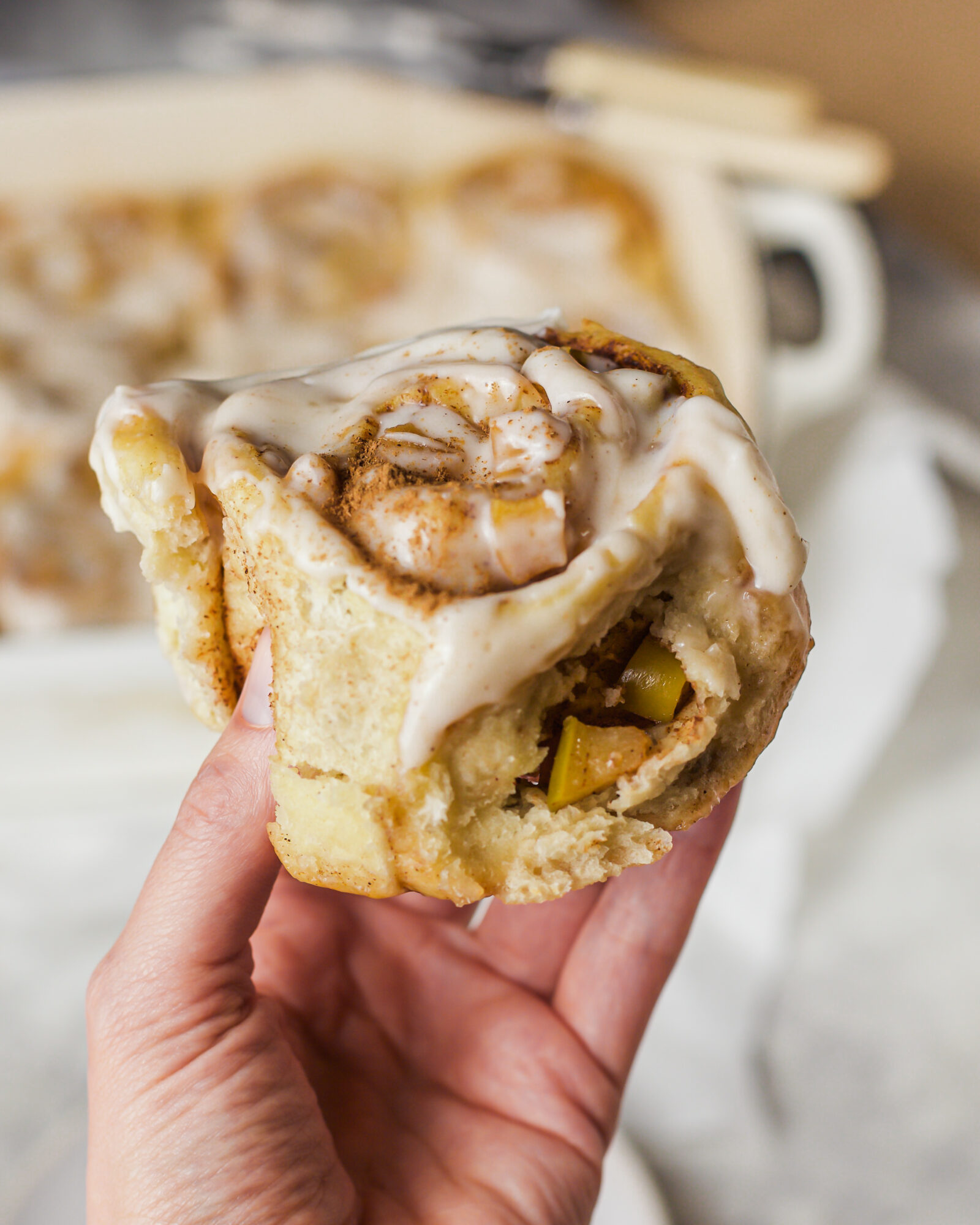 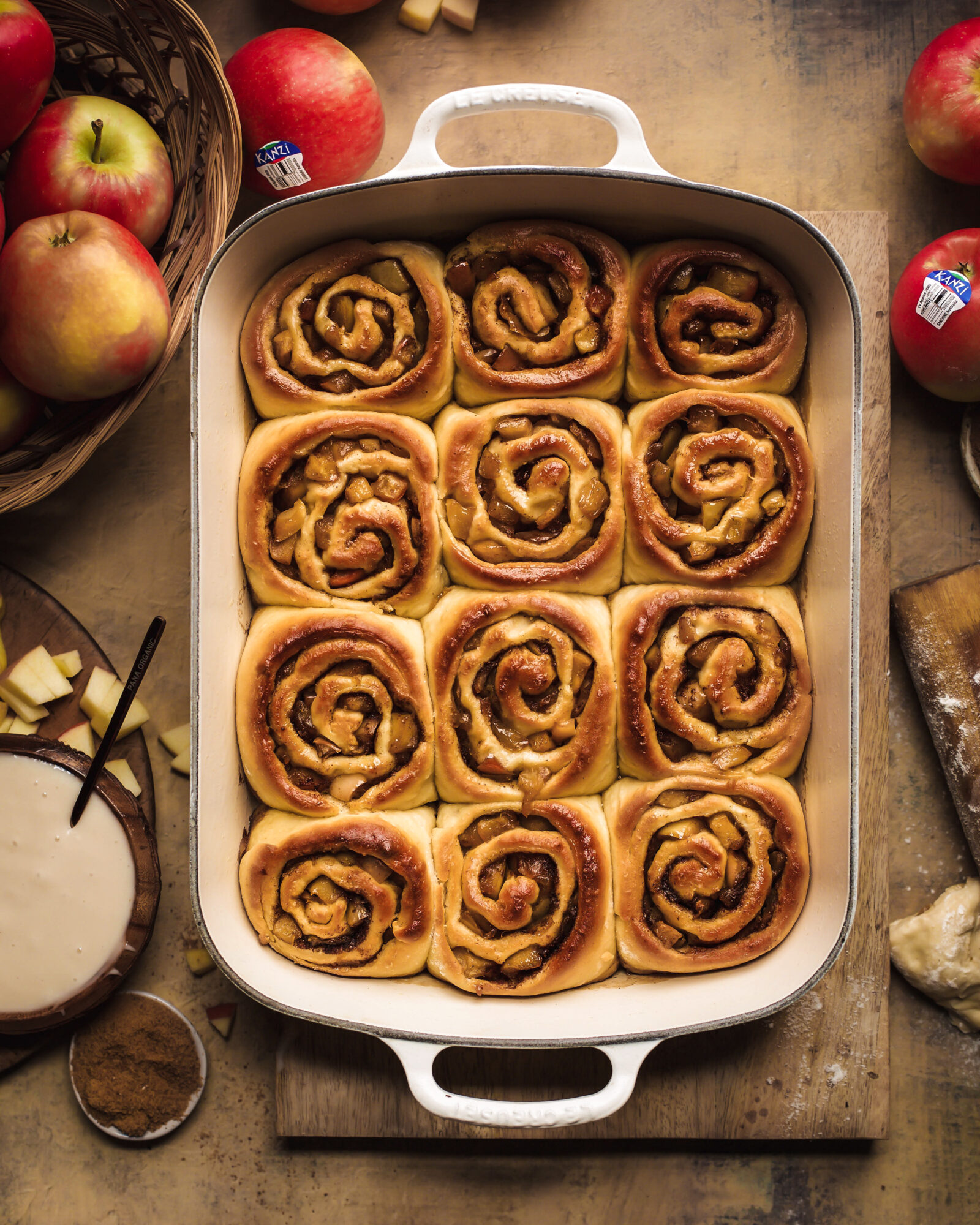 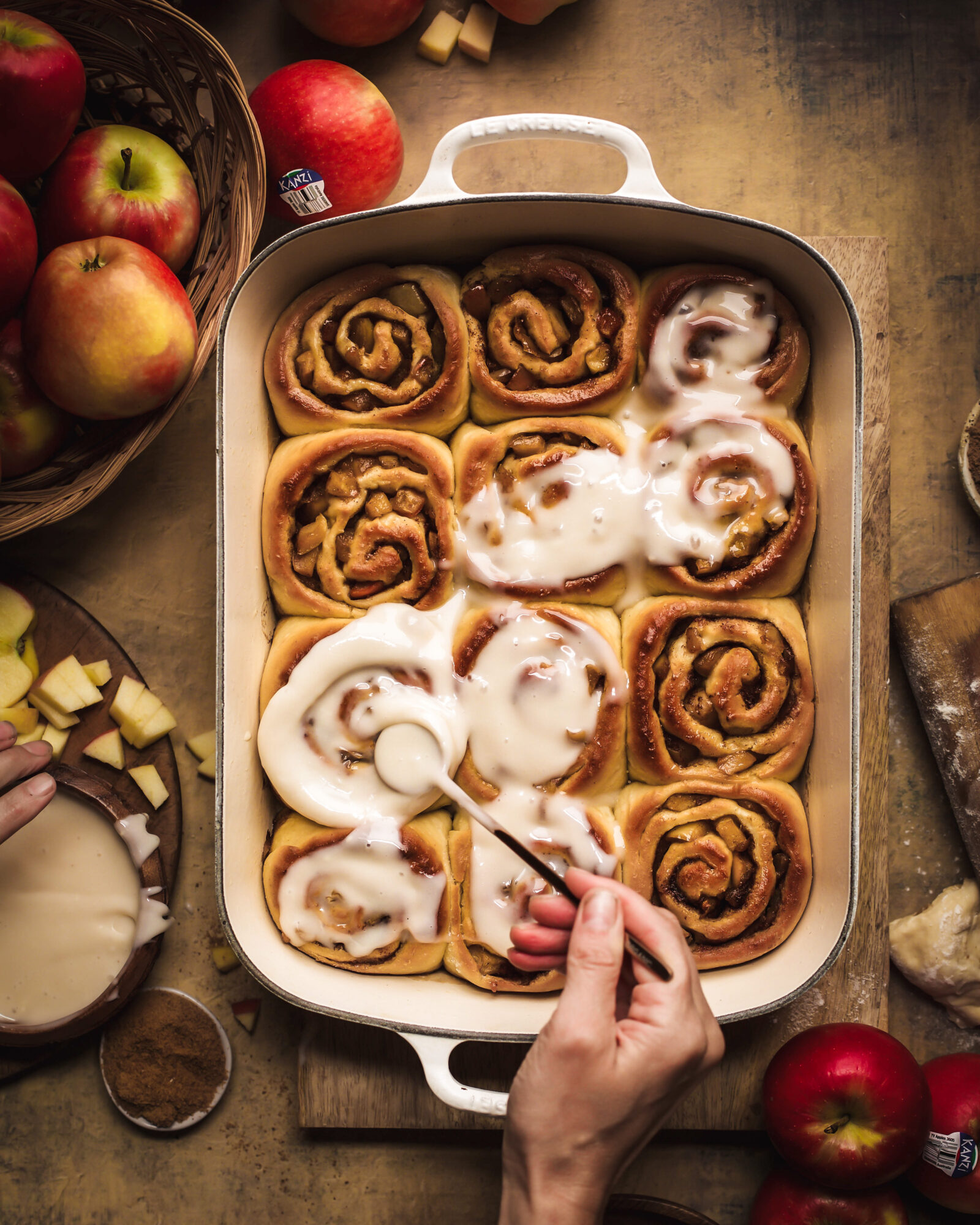 I recommend using scales for this recipe, and testing that your yeast is active (ensure your yeast is less than 6 months old). Add flour to a large mixing bowl and make a well. Add in yeast to the well and cover with flour, then add yoghurt, sugar and salt to the bowl. Hiding the yeast is important to keep it away from eth salt, which would otherwise deactivate the yeast. Set aside.

2. Warm the soy milk in a saucepan until it is around 40-50 C. If you do not have a thermometer you can use your finger to test- the milk should feel fairly warm, but still comfortable and not hot. Pour the warm milk into the flour mix and, using a wooden spoon, combine until the dough becomes too thick to stir. Flour the benchtop and place dough on top. Kneed for 7-8 minutes or until the dough becomes smooth and elastic, adding more flour only as needed to stop the dough sticking to your hands and the benchtop. Wash out your mixing bowl, dry and then lightly oil. PLace dough into the bowl then cover and leave in a warm spot for 1 hour or until it doubles in size.

Meanwhile, prepare the apple pie filling. Core Kanzi apples and dice into 1 cm cubes. Place the butter, sugar and diced apples into a medium saucepan and cook over medium heat for approx 20 mins, stirring occasionally, or until the apples have completely softened. Turn off the heat and set aside to cool. In a small bowl make the cinnamon sugar by mixing the sugar, cinnamon and nutmeg. You will use the butter in the next step. Grease a large, deep dish baking tray (ours was 33cm x 25cm) with butter or oil and also set this aside.

After the dough has risen flour the bench and roll out the dough to a large rectangle. Take time to create an even thickness, around 1cm thick. Spread the set aside butter over the entire surface then top with an even layer of the cinnamon sugar. Try to get the whole rectangle evenly covered. Next, spread the cooled apple mixture on top and again spread evenly.

Now it is time to roll the log. Starting from the long end roll up the side to create a long log. You want to roll it fairly tightly, but without squishing the dough. Once you have created a log it is time to cut it into 12 even slices. The best way to do this is with dental floss, though a very sharp knife will work. Place each slice, with the cut side facing up, into the greased tray. Preheat the oven to 180 C, and set aside the covered tray of scrolls in a warm spot to rise for a further 30 minutes while the oven preheats.
6. Bake for 25 minutes, or until the scrolls are golden brown on top. Brush freshly baked scrolls with extra vegan butter to get the nice gloss top- and you can absolutely enjoy them while warm, or allow to cool and follow the next step to frost.
7. To make the optional cream cheese frosting sift icing sugar into a mixing bowl. Add cream cheese and vanilla. Whisk together until smooth, then spread on top on cooled scrolls and EAT.

Truth is, the best pesto you’ll ever make is one

What is your dream kitchen appliance (And psst, th

December is basically synonymous with gingerbread